First Week Back - Activity Based Learning and Socialising

WALT: use natural resources to understand place value to 100,000

WALT: look at different materials that clothes are made from.

WALT: understand the importance of hand washing
The children completed a science experiment about the importance of washing their hands throughout the day. We put bread into ziplock bags but before doing so we washed our hands with soap and water, with just water, wipes, hand sanitiser and then rubbed a piece of bread on door handles answer with dirty hands.

The children were able to predict what was going to happen to the bread and then after two weeks we discussed the results and examined the mould on the bread.

WALT: create a bowl using wool and a weaving technique.

Game 5: Roll the foam dice and whatever side it falls on the children have to think of a word with that variation.

The children are exploring dance as part of their PE this term. We were practising our synchronised movement mimicking riding on a roller coaster in small groups. We also played a variation of ‘stuck in the mud’ where the person stuck had to create a dance and then the person ‘freeing’ them had to copy their dance moves to co tinge the game. The children were then tasked to do this in groups. After the children were allowed to use their imagination and act like an object or person beginning with a particular letter when shouted. We got some fantastic examples and the children particularly enjoyed playing this game.

WALT: pass the ball in a straight line or behind to our team mate.

The children in P.6. had the opportunity to create a pencil case holder using wool fibres and using a technique to combine all the wool fibres together. The children were guided through this fantastic workshop by the very talented Jennifer Cunningham. The children really enjoyed this activity and were using their artistic skills to combine colours together to create the perfect pencil case. They used soap and water and a rubbing technique to felt everything together.

WALT: create our own Haka dance.

As part of our games in PE we have been completing rugby games and as part of this we decided to recreate our own ‘Haka’. The children were tasked with creating their own routine, choreograph their dance and use synchronisation to keep in time with their friends. This was a very enjoyable lesson and the children immersed themselves into the challenge and  created some fantastic Hakas.

Children creating their own Haka 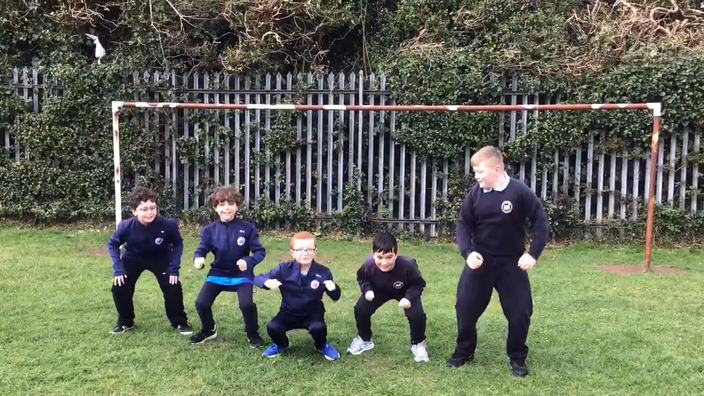 WALT: use a metre stick to measure height and perimeter.

The children were examining the local newspapers looking for their targeted sound of the week (igh sound). They had the chance in pairs to read the paper and pick out igh words and share with the class. Also, they used play dough to help create ‘sound buttons’ to segment and blend /e/ words.

Well done to our Irish Dancing Champions - Nevaeh and Erin

The boys and girls in P.6. Were very active and engaging during our anti bullying lesson. They responded well to the role play situations and offered to say ‘One Kind Word’ to their friends throughout the week. As a class we also created a rhyming poem about social bullying and well done Ella Oakes who won the best poem in P.6. The children also came together to create a class pledge of how we can be nice to our friends in school.

Human Body - Functions of the Organs

The children were tasked with drawing the outline of a human body, drawing where some of the major organs are located in the body while also having to make notes on their main functions on the outside. The boys and girls used QR codes to aid them with their research using an iPad on google chrome.

The children enjoyed a carousel of activities to help practise their times tables from 2-12 and incorporating mental maths strategies to times by 19, 20 and 21. The games included using playing cards and putting a card down and the first one to shout out the answer keeps the card, rolling two 1-12 die and find the product of the two numbers. Children were then faced with the answer and had to write down the potential question on their whiteboards (possibility to have more than one question), children used the interactive board to answer quick fire times tables exploring the different vocabulary associated with multiplication. Lastly, the children had numbers 1-24 on 4 die and numbers 19, 20 and 21 on another and rolled the dice to multiply the number by the given rolled die e.g. 19 x 16.

Creating and Labelling The Human Skeleton

WALT: use chalk to create an advent wreath

Unfortunately not the ones with chocolate chips.

Some cookies are necessary in order to make this website function correctly. These are set by default and whilst you can block or delete them by changing your browser settings, some functionality such as being able to log in to the website will not work if you do this. The necessary cookies set on this website are as follows:

Cookies that are not necessary to make the website work, but which enable additional functionality, can also be set. By default these cookies are disabled, but you can choose to enable them below: